To keep track of people's birthdays, I use Mac OS X's Birthday Calendar feature of Address Book/iCal. I was going through my calendar the other day, and I noticed that a birthday which I knew was sometime in January wasn't showing up. It was on the corresponding Address Book contact, though. I deleted the birthday from this contact and reentered it, which fixed that entry, but on the suspicion that more birthdays might be missing, I flipped through my calendar and found:

The Address Book birthday field has the misfeature that it forces a year to be specified. What a rude thing for Address Book to be asking! Anyway, I'd arbitrarily picked year 1 for the year for any contacts whose birth years I didn't know. Maybe, I thought, the Gregorian reform was throwing things off. However, changing the year to 1900 didn't help matters, and in fact made them worse: 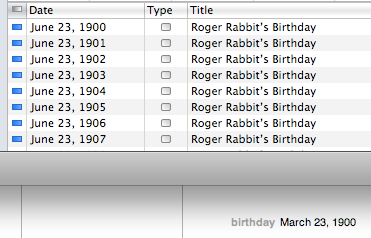 Turning the birthday calendar off (which wipes out iCal's backing store for the calendar) and on didn't help matters. A web search turned up some other people having the same problem, but the only useful solution they came up with was deleting and recreating entire contacts by hand.

I wanted to see if the raw data was wrong in Address Book's database. Address Book uses Core Data in a way that makes the database difficult to work with at the SQLite command-line level, so instead I hacked /Developer/Examples/Python/PyObjC/AddressBook/Scripts/exportBook.py to emit the birthday field by adding ('Birthday', AddressBook.kABBirthdayProperty) to FIELD_NAMES and the following to encodeField: 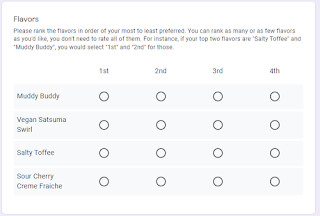